The press machine is a machine to be used for molding into a shpe for obtaining the workpiece, using a mold which forms at least two pairs, a strong force to the workpiece.

Features of the press machine

Generally process using press machine, compared to other process using cutting machine or the like, from the fact that to facilitate the continuous processing, a processing method is suitable for high volume production productivity.
From this feature, it has widely used in production site to carry out mass production, including the automotive industry.
Press machines roughly consisted of two groups: mechanical press and hydraulic press.
There are those of various kinds of mechanical press, recently the advent of new press system using servo motor to drive motor serving as power source to move the machine, from the fact that control the speed and position during processing has become possible, it is able to meet the needs of variety of processing, have become popular replaced with conventional press machines.

Including the development of press machine from 1990, we have developed a new type of press machine "ZENFormer" in 2002.
ZENFormer series adopts the driving scheme using four servo motors and four ball screws to the basic structure, by controlling by the control method of the each of the servo motors own 4-axis independent control, it has the following three specific features different from the general servo press.

◆Against the bias of the load generated during the press working, maintain the slide parallelism with a high degree of accuracy.
◆Achieve the repeat accuracy of the press stop position at the micron level.
◆Maximum pressure can be generated in all stroke position.

By the three features, now is possible to cope with a high precision and high difficulty pressing could not until now.
Now many products made from ZENFormer has been used to those familiar of everyone. 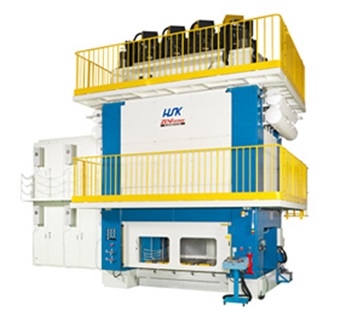